Star Wars Trivia: Round One

This is the first installment of Star Wars trivia on darthmaz314. This first round will focus on the first released film of the saga...Star Wars. All answers below so you will have to scroll down. No cheating or we'll know. The force is strong with us.

1.   What was the name of the blockade runner ship that is captured by Darth Vader’s Star Destroyer at the opening of Star
Wars?

2.   Who speaks the first line of dialog in Star Wars?

4.   What is the name of the reptilian creatures upon which Sandtroopers ride patrol in the desert of Tatooine?

5.   Who raised Luke Skywalker on Tatooine?

6.   In which bay was the Millennium Falcon docked while at Mos Eisley Spaceport?

7.   What was the name of the Rodian bounty hunter that confronted Han Solo in the Mos Eisley cantina?

8.   How fast did Han Solo claim that the Millennium Falcon made the Kessel Run?

10.   What price does Han Solo demand for transporting Luke, Obi Wan, C-3PO, and R2D2 to Alderaan?

11.   How much does Obi Wan offer in response to this demand?

13.   Aunt Beru asks Luke to tell Uncle Owen that if he buys a translator droid to be sure it speaks what language?

14.   What color milk does Aunt Beru serve in the family dinner scene in Star Wars?


15.   The exterior structure that served as the Lars homestead on Tatooine was not a set, but actually a real building. What was the function of that building?

16.   Where were the desert exteriors for Tatooine filmed?

17.  On what level and detention block was Princess Leia being held on the Death Star?


18.   When Princess Leia is threatened by Grand Moff Tarkin with the destruction of her home planet of Alderaan, which planet does she name as the location of the hidden Rebel base?

19.   What are the last words spoken by Obi Wan Kenobi while he was alive?

20.   What was Luke’s call sign during the attack on the Death Star?

21.   The Rebel base was on a moon orbiting what planet?

8.   In less than 12 parsecs. This answer can be confusing since a parsec is a measure of distance, not speed.

11.   Seventeen thousand. Two thousand up front, plus fifteen
upon arrival at Alderaan.

13.   Bocce (I wonder if she meant to ask if it could PLAY bocce. After all, it was lonely on Tatooine for a moisture farmer’s wife.)


18.   “You can’t win, Darth. If you strike me down, I shall become more powerful than you can possibly imagine.”

Spaceship Earth: A Technical Marvel, Both Inside and Out: Part 2 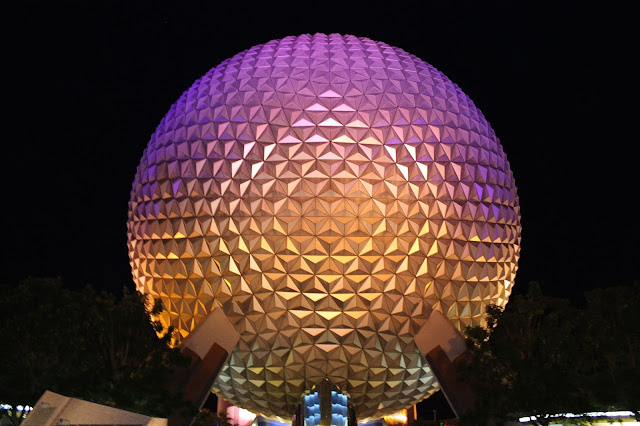 Spaceship Earth is an original Epcot attraction, which although updated through the years, has remained essentially the same in concept and staging as it was on the park’s opening day in 1982. The attraction was co-designed by science fiction writer Ray Bradbury, author of the novel Fahrenheit 451. The term “Spaceship Earth” Was originally coined by futurist Buckminster Fuller, who devised the structural mathematics of the geodesic dome and was at one time, the president of Mensa. 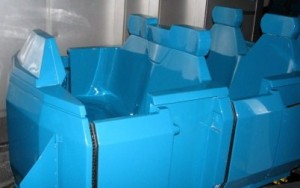 The attraction inside the massive spherical structure of Spaceship Earth is a slow moving “dark ride” during which visitors travel in “Time Machine” vehicles on a track that spirals its way up to the top of the sphere and then eventually back down for rider disembarkation. The attraction traces the history of communication on Earth from its crudest form, when out of necessity, prehistoric man used simple communication to coordinate hunting parties, to an idealized glimpse into the future where technology has been harnessed to enhance and enrich the everyday lives of humanity. The “Time Machine” vehicles utilize the OmniMover ride 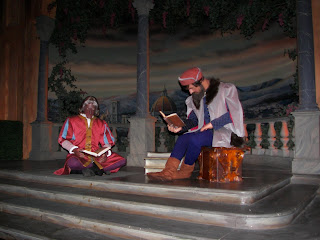 conveyance system which transports riders through the spherical structure past a series of scenes that use Disney’s patented Audio Animatronic figures, elaborate sets, and various audio, visual, and even olfactory special effects to tell the story of human communication through the ages. Riders are guided on their journey through time by the narration of English actress Judi Dench. 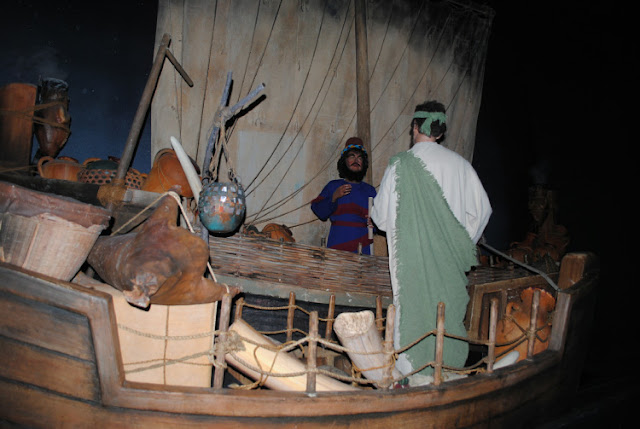 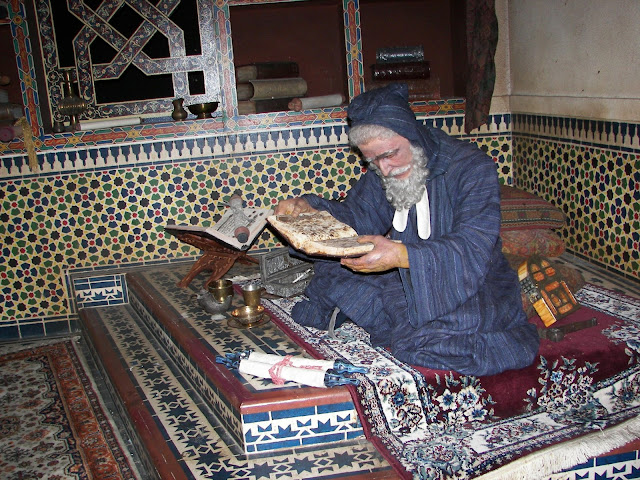 a Christian monk who has fallen asleep while transcribing a Bible text... 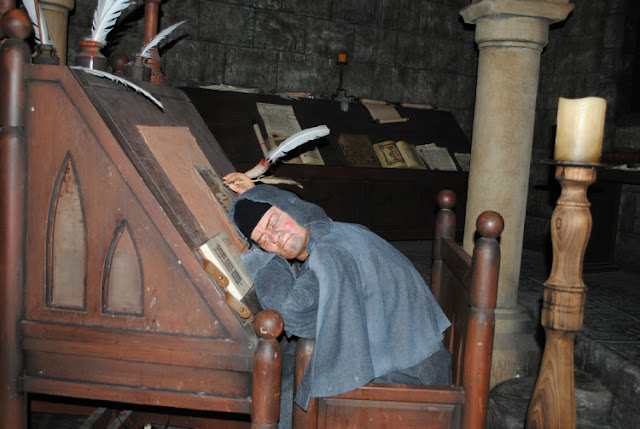 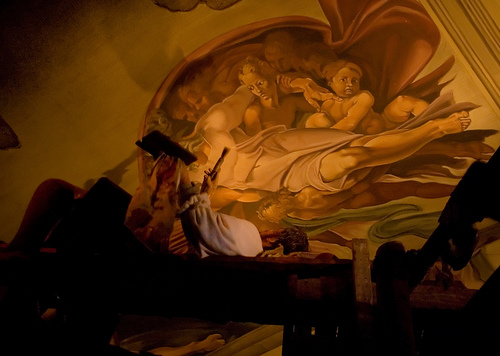 Later scenes depict the invention of the printing press and the introduction of television into the American household.

Another pivotal scene depicts the advent of the personal computer and includes a recreation set in a California garage, where a young man, believed to be Apple co-founder Steve Wozniak, can be seen tinkering around with what would become one of the most impactful communication inventions of the last hundred years; the personal computer. 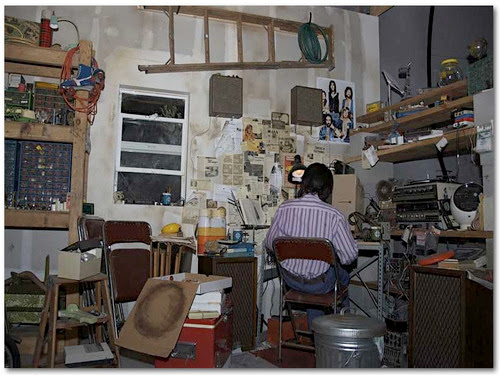 Always a favorite of mine is a transition scene meant to signal the fall of the Roman Empire and the onset of the Dark Ages. This scene consists of dark lighting, the rubble of Roman columns, an effervescence of steam and the infusion of a pungent odor, 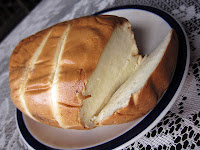 meant to further underscore the destruction of Rome's grand empire. Rider opinions vary as to what this odor calls to mind, but to me it smells exactly like smoked mozzarella!

As the Time Machine vehicles reach the upper section of Spaceship Earth’s structure, riders can gaze upward to a star field projected onto to the upper dome, which is reminiscent of an old planetarium show. The vehicles then rotate backward as the riders begin a slow (but steep!) descent back down to the lower section of the dome for unloading. As they descend back to sea level, riders can look into the future as they take part in an interactive experience via the display screens mounted in each Time Machine vehicle. 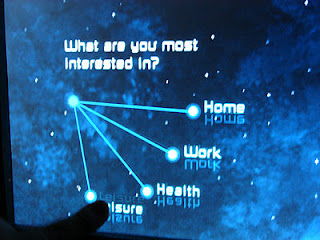 Riders are asked a series of scenario and preference questions, which they respond to by using the display’s touch screen capability. Those responses are used to create a futuristic animated vignette, which features characters complete with the superimposed faces of each rider. The rider photos are captured at the start of the attraction during the ascent into the upper part of the sphere’s structure. These 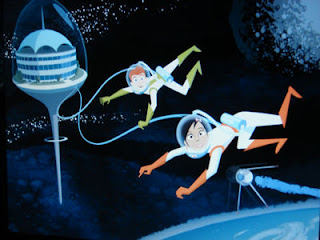 interactive animated vignettes, a component of the last Spaceship Earth update, provide a truly unique and whimsical conclusion to the attraction. This infusion of “Disney-esque” whimsy engages younger riders perhaps more than any other aspect of the show and helps make Spaceship Earth an attraction appropriate for all ages. 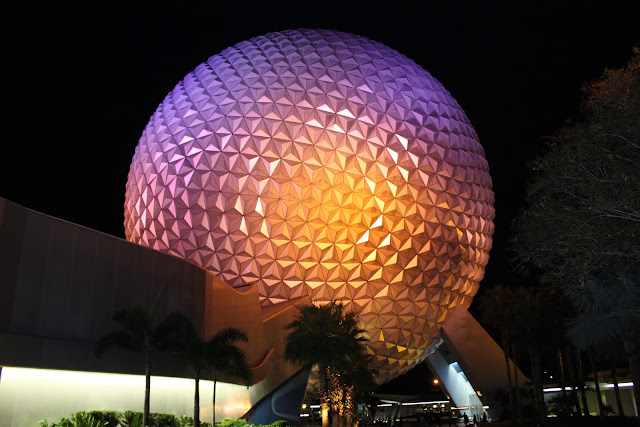 If you have not already read it, check out Part I of this post by clicking on the link below....


Spaceship Earth: A Technical Marvel Inside and Out
Posted by darthmaz314 at 2:54 AM No comments: