What Will Replace the Studio Backlot Tour at Disney's Hollywood Studios?

So with the Back Lot Tour now closed, the inevitable question arises..."What will be replacing it?"With so many sizzling hot properties just waiting to be infused into their theme parks, Disney could not be in a better position to develop new attractions. Many also believe (yours truly not among them) that Hollywood Studios is dying on the (Hollywood and...) vine and quickly falling to the bottom of the Disney "must do" list of parks. Star Wars Land and Cars Land have both been rumored for some time now, including in the darthmaz314 posts linked below.

Is Star Wars Land Coming to Walt Disney World? I Have a Good Feeling About This... (click for link)

One would think that if Star Wars Land were to become a reality, it would need to materialize around the existing Star Tours: The Adventure Continues attraction. The fact that the Backlot Tour is at the opposite end of the park most likely means that the Force is not strong with the notion of a Star Wars expansion on the Backlot Tour footprint. Both MuppetVision 3D and Lights, Motors, Action! fall in between Star Tours and the Backlot location and both have also been rumored to be on their way out. Then again, very little at the Studios has not been rumored to be on its way out. Removing both Muppets and Lights, Motors... would clear a huge footprint on which Star Wars Land could be developed.

However, this plan would also require the elimination of the Streets of America section, leaving nowhere to insert the hugely popular Osborne Family Spectacle of Dancing Lights at Christmastime. This would also seem to require the removal or retooling of both the Pizza Planet and Mama Melrose dining locations. All possible in a place where anything is possible, but not very likely. If the Osborne Lights were removed, it is hard to imagine it not being relocated to another section of the park, given its huge popularity and ability to drum up attendance at the Studios, a park which some feel needs an overhaul. Is there really another area of the park where Osborne Lights can be overlayed each year? With the development and implementation of the display over time and its long run in that location, it almost feels as if the Osborne lights were meant to be in that area of the park; an area which outside of the two months a year when Osborne in in residence, is one of the Studios lowlights.

So where does this leave Star Wars Land? It leaves it in the current location of the Indiana Jones Stunt Spectacular, another attraction which just happens to be adjacent to Star Tours, has a large footprint on which to build, and has also rumored to be on the chopping block. Expanding in the area of Indiana Jones still allows the option of removing MuppetVision 3D and keeping the Streets of America, whose tall facades already provide an existing barrier to separate the two areas which would feature vastly different themes.

What then happens with the enourmous footprint of the Studio Backlot Tour? Some have speculated that an expansion of Pixar Place in inevitable in that spot, particularly since it lies adjacent to the the Backlot Tour area (see map above). Could that expansion include the development of Cars Land? This would seem to be a no brainer, particularly considering how the west coast Cars Land re-invigorated Disney's California Adventure park.

For Disney fans, it is now all a waiting game. Waiting to see what attraction, if any, closes next. Waiting to see if Disney develops anything Star Wars or Cars related. And most importantly, waiting for any new attractions to be developed, built, tested, and opened to the public. With the current rate at which Disney builds attractions, by the time they open a new Star Wars attraction, I will be too old to ride it. Here's hoping for the best!

For today's Disney Snapshot of the Day, darthmaz314.com brings you the show stealing steampunk Maleficent Dragon from the new Festival of Fantasy Parade at Walt Disney World's Magic Kingdom. The Festival of Fantasy Parade, which debuted earlier this year at Magic Kingdom, is by far one of the best parades ever presented at Disney World. The breathtaking dragon below manages to top the list of sights and sounds crammed into this parade full of magnificent sights and sounds.

The dragon's massive size, ominous design, and hypnotic visible inner moving parts are enough to make this hands down the nastiest float to ever appear in a daytime Disney park parade. All that is before it spews forth a blast of fire from its open jaws, which are lined with razor sharp teeth. The picture definitely does not do it justice. Nor does any video you may see posted on the net. This is one of those Disney "must sees" that you absolutely have to experience in person. So if you plan to be in the Magic Kingdom, be sure to catch the Festival of Fantasy Parade and this badass Maleficent Dragon.

darthmaz314 will bring you the entire Festival of Fantasy Parade, featuring the Steampunk Maleficent Dragon in all its fire spewing glory, in a future post...so keep checking back.

darthmaz314 WDW Video Featurette: The Boo To You Parade From Mickey's Not So Scary Halloween Party


In early September, darthmaz314 had the opportunity to attend his first Mickey's Not So Scary Halloween Party (MNSSHP) at Walt Disney World. This party is one of the special event offerings that have been such a success at Walt Disney World in recent years. I have personally been trying to make it to this event for quite a while now and scheduling conflicts have prevented from attending for years. This year my visit to Disney happened to coincide with  the very first MNSSHP of the season, which took place on September 1st, a full two months prior to Halloween!  Expectations were high, but as is usually the case, Disney did not disappoint, delivering top notch unique entertainment, that is signature Disney through and through.

As part of our continuing coverage of Mickey's Not So Scary Halloween Party, today darthmaz314 brings you HD video of The Boo to You Parade from MNSSHP. This parade, complete with tons of Disney characters, performers, and attraction-inspired floats, is loaded with ghoulish delight, all on a family friendly frequency, so as not to frighten the kiddies.

So if you can't make it to Walt Disney World for the MNSSHP this year, let darthmaz314.com take you there instead! Happy Halloween!

Mickey's Not So Scary Halloween Party nights are in full swing at Walt Disney World and Magic Kingdom's Main Street is decked out in Halloween fashion. Today's Disney Snapshot of the Day features one of the pumpkin scarecrows that greet guests upon entering the park. The not so scary fellow below, who greeted guests for the 2013 Halloween season, was ready to hit the diamond in honor of the October baseball postseason. Mickey's Not So Scary Halloween Party nights run through October 31st.

Happy belated birthday to Walt Disney World's Magic Kindom, which opened it's gates on October 1st, 1971. Walt Disney himself believed that his parks would never truly be finished. They would be evolving and changing throughout the years, as if they were living, breathing things. Walt's vision for "the Florida Project" has been made reality in the intervening years since his death in 1966. Four theme parks, two existing water parks, a shopping, dining, and entertainment district, and countless resorts later, Walt's world is still evolving, expanding, and changing. But today's Disney Snapshot of the Day pays tribute to the original Orlando park...The Magic Kingdom. 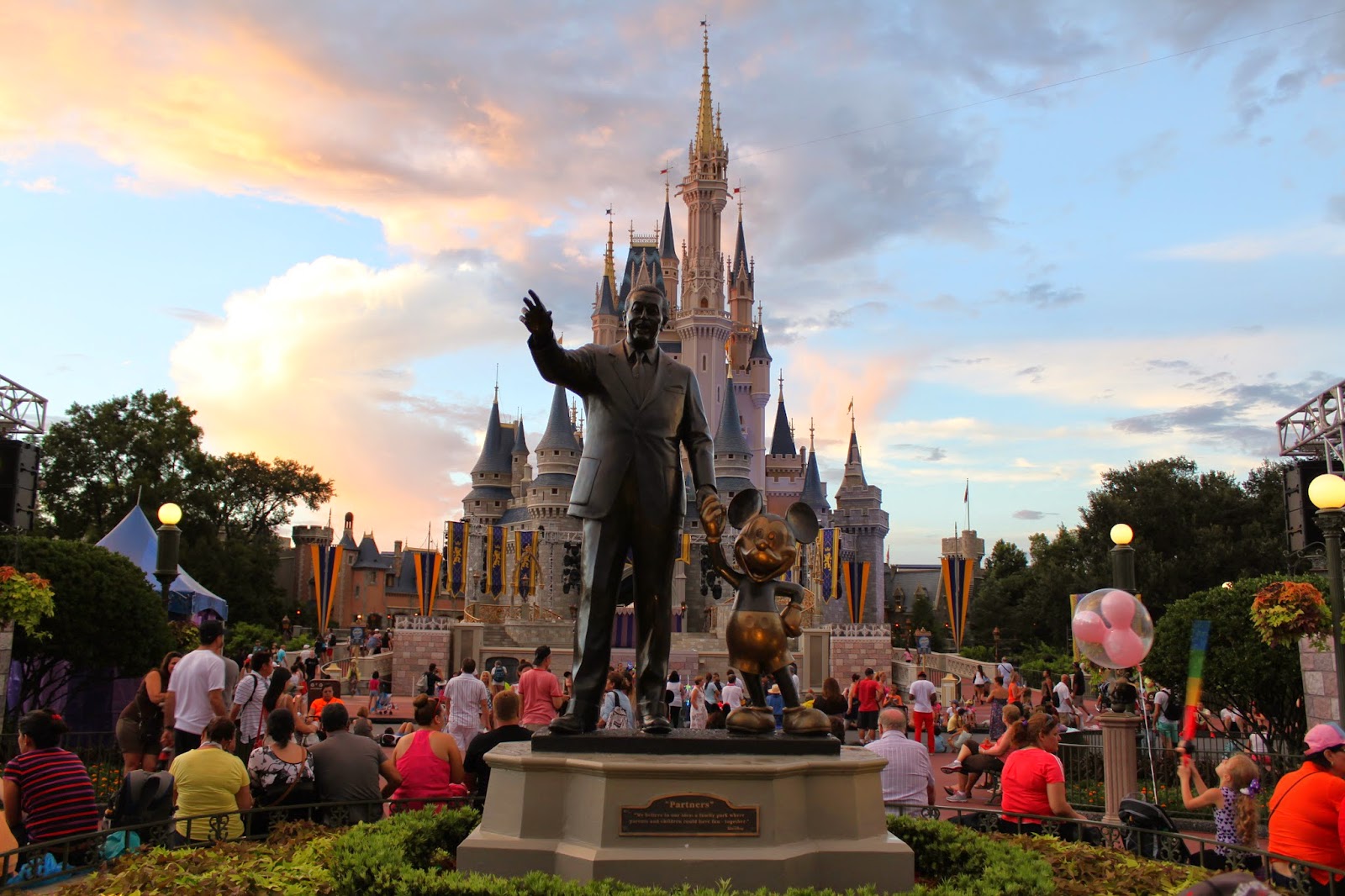