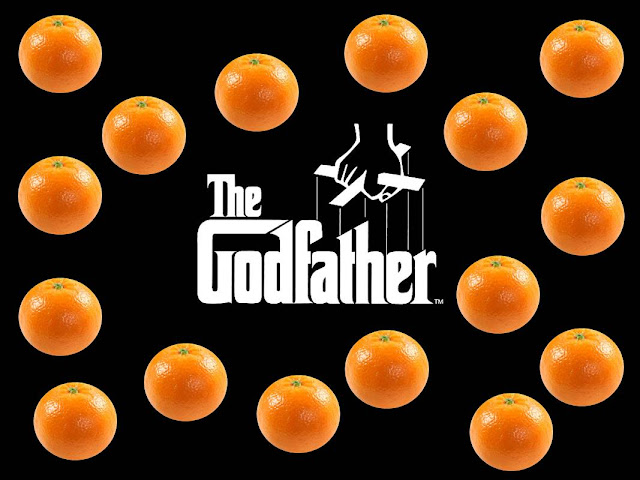 The Godfather films are legendary around the world. Most people have seen these iconic films and many of us have seen them numerous, numerous times. Yet, you may have never noticed that there is a persistent foreshadowing of most of the deaths in the film. One might even say that there is an omen of death in the Godfather films. Godfather aficionados are smirking in denial now, certain that they would have noticed something so obvious. Well, aficionados, two things will surprise you. The first is the fact that you may never have noticed these repeated signals carefully placed under your nose forty years ago by a brilliant filmmaker. The second is the choice of the object itself. You see, if this object were literally under your nose, death would probably be one of the furthest things from your mind. Francis Ford Coppola, uses the humble, non-threatening, normally cheerful, and always nutritious orange to foreshadow death and murder in his Godfather films. Intrigued? Read on.

During Connie and Carlo's wedding reception scene, there is a shot of the Don’s caporegime Sal Tessio sitting at a table, enjoying the festivities. He reaches to the center of the table and grabs an orange that he playfully tosses in the air. If he had read what follows, he might have left that orange alone.
(*See Abe Vigoda Lives!!!!! trivia note below) 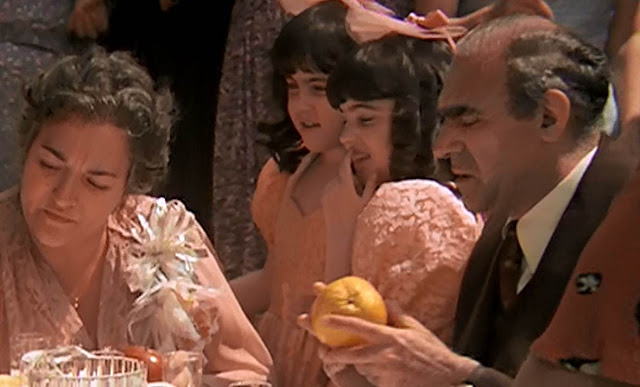 When Tom Hagan has dinner with studio head Jack Woltz, for the purpose of securing a critical career-saving movie role for Johnny Fontaine, a large bowl of oranges sits on the table between the two of them. Woltz refuses to give the part to Johnny and throws Tom Hagan out of his home. In the infamous next scene, Woltz awakens to find the severed head of his prize horse Khartoum under the covers at the foot of his satin-sheeted bed. Woltz should have decorated his table with apples...or given Fontaine the part. 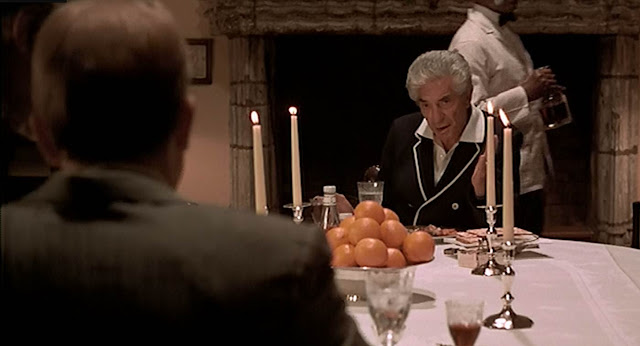 Before he is shot in the street in a failed assassination attempt, Don Vito Corleone is buying oranges. As he attempts to flee his assassins, the Don upsets, not the applecart, but the orange cart. 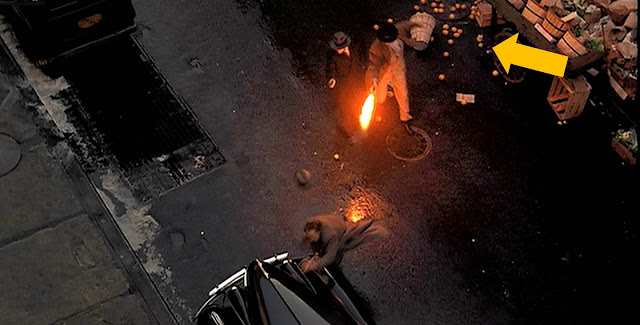 In some case, the color orange substitutes for the orange fruit as an omen foreshadowing death in the film.When Sonny Corleone beats the piss out of his brother-in-law Carlo in the street, Carlo is wearing an orange suit. Although Carlo manages to live for a while longer, he meets his unfortunate end later in the film on the day of the Baptism when Michael "settles all family business." 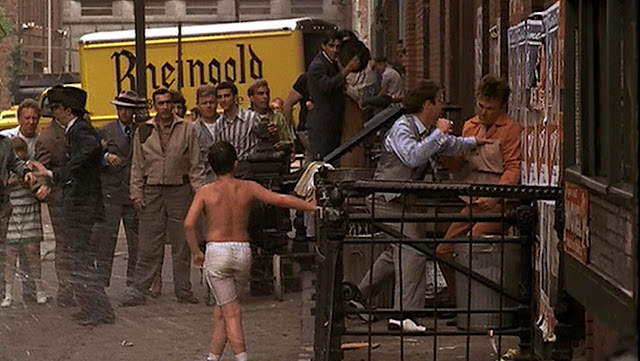 During the meeting of the Five Families, held to call a truce to the mob war that erupts after Solozzo and McCluskey are murdered by Michael, fruit bowls with oranges are on the table. Both Tataglia and Barzini are seen with an orange in front of them in this scene. Both are later murdered in the Baptism day massacre orchestrated by Michael. 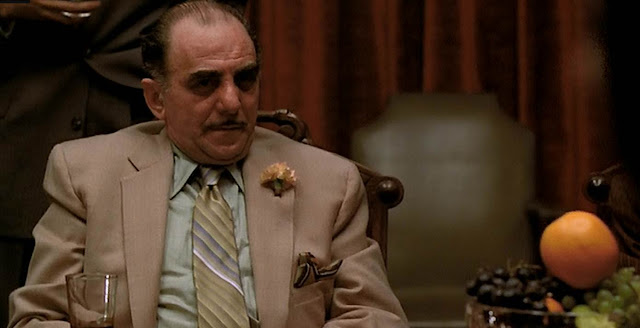 The retired and weakened Don Vito Corleone plays in his garden with his grandson Anthony near the end of the film. On the table in front of him is a peeled orange. The Don playfully allows the boy to chase him around as he grunts and growls, pretending to be a monster. Before he does this, he appears to take an orange peel and place it in his mouth over his teeth, much like the mouthpiece of a boxer. Moments later, he collapses dead in the garden. Let’s face it, the Don (rest in peace) was slippin’. If he were as clever as he had been in his younger days, the oranges he attempted to buy earlier in the film before his assassination attempt, would have been his last.

Another example of the color orange foreshadowing death involves casino owner Moe Green. Moments before he is shot in the eye by a Corleone assassin, Moe is receiving a massage from a man wearing orange sweatpants. 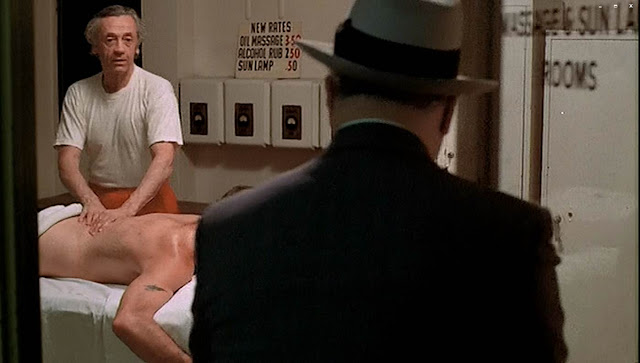 When Willie Ceci assassinates Cuneo in the revolving door, the button man is wearing an orange shirt. 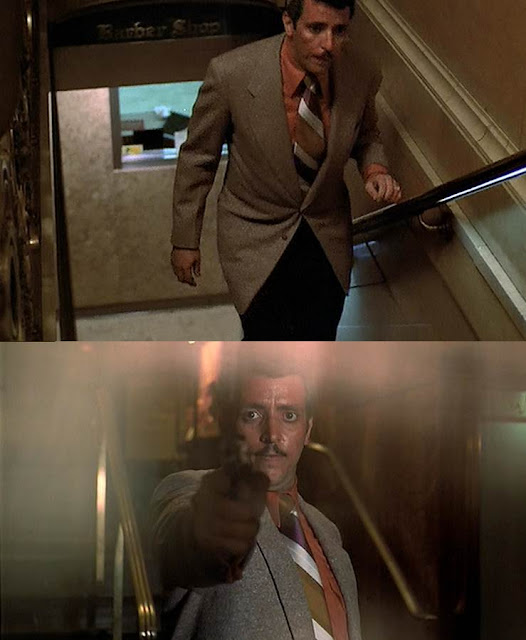 * Abe Vigoda Lives!!!!!!!!
Godfather fans know that Tessio never returned from that infamous car ride he took near the end of the film. In fact, the persistent rumors that actor Abe Vigoda is dead makes you wonder whether people believed that he really was whacked on the set of the Godfather. After surviving the wrath of Michael Corleone, Vigoda later portrayed police detective Phil Fish on Barney Miller (1975 -77) as well as in the spinoff series “Fish” (1977-78).
In 1982, People Magazine erroneously reported that Vigoda was dead, thus launching the death rumor. Then in 1987, a local New York news broadcaster referred to him as “the late Abe Vigoda” helping to further the greatly exaggerated rumors of his death. Alive and well, Vigoda appeared in the 2010 Snickers Super Bowl ad that reinvigorated the career of Betty White. 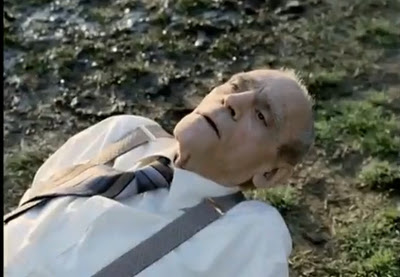 Are there some orange omens that we missed in Godfather I? Let us know by posting a comment.

Look for another post about the Orange Omens in Godfather Parts II and III coming soon to darthmaz314...
Posted by darthmaz314 at 4:52 AM