The Dark Knight Rises, But Does It Meet Our Expectations? 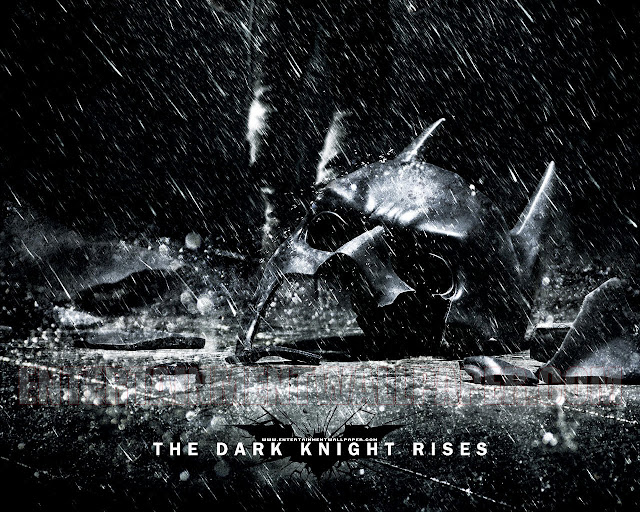 The Dark Knight Rises stormed into theaters on July 20th, preceded by great anticipation and followed by great tragedy. Having expressed our condolences and best wishes for the victims and families affected by the senseless tragedy of the film’s opening night, darthmaz314 now shifts the focus onto the film itself. The third and final installment of Christopher Nolan’s incarnation of Batman had the dubious task of following up on the epic second film in the series. The Dark Knight brought comic book movies to a new dark and twisted place, a place ruled by the unhinged master of chaos, Heath Ledger’s Joker. It set the bar high and it would be no easy task for the final film in the trilogy to surpass its predecessor. Now that the film has been in release for several weeks, darthmaz314 examines just how high this Dark Knight really rises. 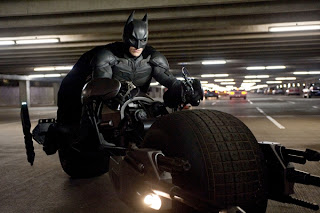 
The Dark Knight Rises brings the Christopher Nolan trilogy to a phenomenal ending. The plot of this film very securely tethers it to the first two installments. In fact, this is not one of those sequels you can see without having seen the previous films in the trilogy. To truly understand and appreciate the layered storytelling that Chris Nolan lays before the audience, it is necessary to have seen, and really paid attention to, both of the first two films. Although there is a lot thrown up on the screen for the viewers to follow, by the final frames of Dark Knight Rises, all the little plot lines and character stories are neatly tied up into little black Bat bows. 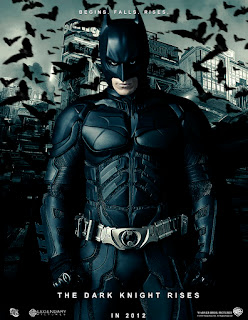 This film straps the audience in for another ride on Bruce Wayne’s emotional roller coaster, only this time it’s a front row seat and you will undoubtedly need to chew back your lunch before you disembark the ride vehicle. The story once again lays bare the soul and vulnerability of Bruce Wayne and by default, Batman. If the first film was about Wayne’s coming to grips with the death of his parents and the vengeance that fuels his crime fighting crusade and the second was about his sacrificing his one true love before he could toss aside the cape and cowl, then this film is about redemption, Bruce’s commitment to Gotham, and his refusal to accept defeat no matter what the odds. Indeed, the Dark Knight Rises not once, but twice in this final installment. Batman is dragged to hell both physically and emotionally in this story and is truly defeated in every sense of the word in the film’s darkest moments. Stripped of his fortune, his strength, his dignity, his freedom, and his anonymity as Batman, Bruce is left to languish in a personal hell while his enemy seeks to push Gotham into the abyss that it has teetered above for the entire trilogy. Yet, in the end, Batman’s rise is less about the cape, cowl, and contraptions, than it is about the power of perseverance, the ferocity of true conviction, the invincibility of hope, and the belief that even in a cess pool of evil and negativity, there is always some good, buried beneath.


Not Your Father’s Batman 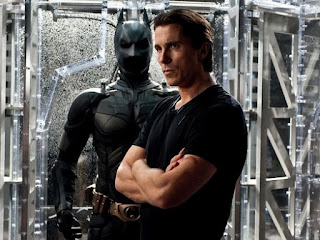 Credit Warner Brothers, Legendary Pictures,
and DC Comics for not sugar coating their trilogy in order to sell more toys. The plotlines, PG-13 ratings, and two hour plus durations of all three Batman films are clear indicators that this trilogy was geared toward the teen and fanboy audience. Perhaps Warner, Legendary, and DC were all confident that they would make enough money without bringing in the higher-single digit age bracket. Perhaps they banked on their parents bringing them anyway. Whatever the thought process, it is clear that at some point early in the development phase of Batman Begins, someone decided that they didn’t care if kids “got it.” The Dark Knight Rises continues the trilogy’s pattern of juggling the genres of comic book film and psychological thriller, the latter of which is usually not easy for kids to follow. The plot of The Dark Knight Rises is filled with back story and details on character origins, as well as a strong thread that one must follow through all three films to truly understand and appreciate the yarn that Christopher Nolan is attempting to spin. If the Ra’s Al Ghul and League of Shadows plotline from Batman Begins was difficult for young kids to truly comprehend, then the story that ties Ra’s to the final installment is enough to make the kiddies’ heads spin. However, Christopher Nolan makes it work through the use of well- orchestrated flashbacks at the proper moments and by boiling the visual story telling down to a good versus evil tale that all can follow on some level. Additionally, despite the  PG-13 rating, there is little that would shock a child of 9 – 13 in this film.

Although this film has more humor infused than the previous two in the series, the ominous tone of the first two films pervades in The Dark Knight Rises. Nolan paints with a palette of blacks and grays in this trilogy, literally and figuratively. This is in stark contrast to the Tim Burton/Joel Shumacher Batman films, which were fairly dark and foreboding in their own way, yet still over-the-top and cartoonish on many levels. The Nolan trilogy is almost unrecognizable as an incarnation of the Caped Crusader when compared to the 1960’s television version of Batman, which was brilliant and wildly entertaining in its campy and comedic delivery. Ultimately, there is room for all these versions on the cowled crime fighter. Each is unique and subject to opinion, yet all have something to offer, although by the time we arrived at Batman and Robin, the wheels appeared to have come off the Batmobile. 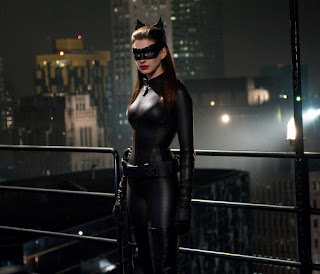 Catwoman is hands down one of the most intriguing female villains realized in recent fiction. Maybe it’s the fine line she treads between cold-hearted criminal and misunderstood victim scratching and clawing to survive in a world dominated by cruel and evil men. Maybe it’s the decency that always seems to lurk somewhere beneath the mask, a decency separates her from the other more sinister villains of Batman lore. Maybe it’s the stunning women in skin tight body suits that have portrayed the character over the years. Regardless, The Dark Knight Rises brings a new kitty to the party in Anne Hathaway. Admittedly, although Hathaway is a fine actress, I had reservations about her casting as Catwoman. Yet, while others may have more natural beauty than Hathaway, she portrays the feline felon with a steely cool sexiness and confidence that truly does justice to the character. Mix in a layer of surly sarcasm and a slight hint of well buried vulnerability and you can see why she was given the role. She also doesn’t look too shabby in the cat suit. So what do I know? 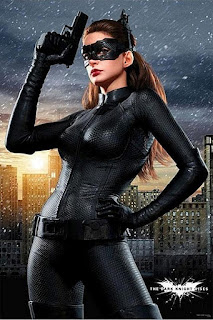 From the moment her character is introduced, Hathaway eats up every inch of celluloid she appears on, making it hard to dislike her and impossible to ignore her. However, by the middle of the film, a betrayal perpetrated by her character turns the audience on her faster than she can pick a pocket. Yet, Hathaway makes the audience yearn for a redemption scene so that they can rally behind her naughty little kitty cat in the end. In the final analysis, Anne Hathaway proves me wrong and is more than worthy to join the pantheon of purrrrrfect Catwomen. 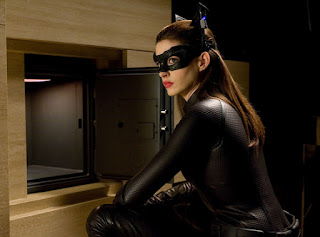 Here’s an interesting piece of trivia for you Batphiles. Anne Hathaway’s character is never referred to as “Catwoman” in The Dark Knight Rises. In the credits, the character is listed as “Selina Kyle.” Also, her “costume” features no cat ears. However, when in her cat burglar gear, Selina wears a pair of high tech magnification goggles that can be flipped up to rest on her head when not in use. When resting in that position, they surprisingly resemble cat ears. Holy coincidence!
Bane
Why was Bane chosen as the villain for this film? It has been reported that Christopher Nolan wanted an adversary that would test Batman both physically and intellectually. Mission accomplished. Would we all have loved to see Chris Nolan’s version of the Riddler? Considering Nolan’s casting of Heath Ledger and Ledger’s brilliantly sinister portrayal of the character, one would have to respond with a resounding “YES!” But Bane does not disappoint. In fact, the character is appreciated (and hated) more upon a second viewing. 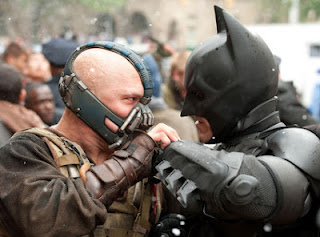 Those not immersed in the comic book world of Batman, most likely only know of Bane by his appearance as Poison Ivy’s cartoonish minion in Joel Shumacher’s Batman and Robin. There is a significant history for the character in Batman comics, having first appeared nearly twenty years ago in 1993, yet to many, Bane is probably little more than an infrequently used noun. While more could have been done to develop the nuances of the Bane character, enough is done to generate a deep desire on the part of the audience to see him drawn and quartered. My guess is that there were scenes that were in the script and perhaps ended up on the cutting room floor that filled in the blanks on Bane, but were opted out in light of the hefty length of the film. 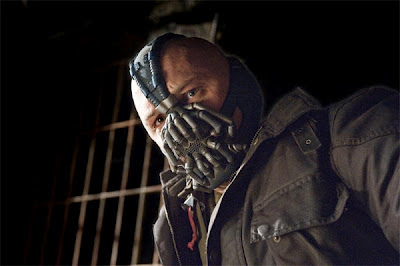 It would be nearly impossible to top Heath Ledger’s Joker performance in The Dark Knight, which has been immortalized by the actor’s untimely death and posthumous Best Supporting Actor Oscar. Nonetheless, Tom Hardy more than holds his own bringing Bane to the screen. In a true testament to his dedication to the role, Hardy reportedly gained 30 lbs. and bulked up massively to play the cold blooded terrorist. And Hardy’s vocal delivery is truly bone chilling. The accent, the speech intonations, and of course, the booming voice echo through the mask, add to Bane’s icy cold demeanor and imposing physical appearance. Let’s face it, all great villains have some sort of an accent or vocal eccentricity that enhances their mystique.


Surprise, Surprise, No Disappointments Here
There are more than a few surprises for all to enjoy in The Dark Night Rises. No spoilers in this post, (for the seven people who haven’t yet seen the movie), but suffice it to note that the plot keeps you guessing until the end. What’s more, the surprises are not surprises for their own sake. They fit well into the plot and not thrown in for a few cheap thrills.
The Dark Knight Rises follows in the footsteps of The Hunger Games and The Avengers as one of the three best marquee movies of 2012. It delivers on all levels and is sure to please the casual Batman fan, as well as the comic-obsessed devotee. So look to the skies for the Batsignal citizens of Gotham, for the Dark Knight rises tonight. 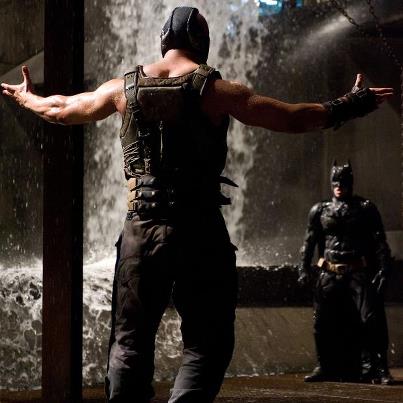