Epcot's Spaceship Earth: A Technical Marvel, Both Inside and Out

This is the first in a continuing series of posts focusing on Walt Disney World attractions. Please be sure to check back for more whether you are a casual or crazed fan of Disney World.


As visitors enter the main gate of Walt Disney World’s Epcot theme park, they are greeted with the awesome sight of Spaceship Earth, a massive 18 story geodesic spherical structure, which houses﻿﻿ an original Disney attraction of the same name. Spaceship Earth is Epcot’s most recognizable icon and is truly remarkable to behold. A veritable wonder of architectural design, this towering marvel of technology contains a 16 minute “dark ride” that chronicles the development of human communication from our species’ primitive days through the not too distant future. The structure itself is so massive that it instantly dwarfs visitors as they approach it, climbing starkly, yet elegantly into the central Florida sky. ﻿ ﻿﻿ ﻿

The Spaceship Earth attraction took twenty-six months to construct and was completed for Epcot Center’s opening on October 1, 1982. The design was modeled after the Biosphere, a United States pavilion at the 1967 World’s Fair in Montreal. Spaceship Earth’s geodesic sphere structure stands a dizzying 180 feet in height and has a vast circumference of over 518 feet. 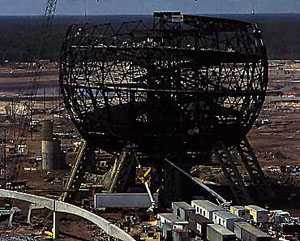 A little known fact about Spaceship Earth is that it is actually comprised of two inner structural domes. The upper structural dome sits upon a steel ring at the sphere’s perimeter. This ring is mounted atop six legs which are supported by piles driven over 120 feet into the Florida earth. The lower dome is hung below the central supporting ring, completing the sphere shape. An intricate arrangement of trusses within the ring supports the internal “ride and show architecture.” This ring and truss system forms a table-like structure which in essence, divides the upper and lower domes.

The dual dome spherical structure supports and is surrounded by a “cladding sphere” to which the silver triangular exterior panels are mounted. This cladding sphere is separated from the inner structural spheres by a distance of three feet. One amazing and hidden feature of Spaceship Earth is the service car that resides in the space between the inner spherical structure and the outer cladding sphere shell. This device can transport a prone service technician along the surface of the sphere to sections of the outer shell that may require repair.

Another ingenious design feature that has gone unnoticed by millions of Epcot visitors since 1982 is directly linked to the often erratic central Florida summer weather. Anyone who has visited Orlando in the summer will tell you that violent afternoon thunderstorms are not uncommon. In the decades since Epcot opened its gates, countless Disney visitors have sought refuge from the deluge of those afternoon thunderstorms under “that huge golf ball thing.” Without realizing it, they chose an excellent location to escape the rain. Spaceship Earth’s exterior shell was designed so that no rainwater runs off the surface of the sphere and onto the ground or anyone standing below the sphere itself. Rainwater is absorbed through one inch gaps in the triangular surface tiles, is collected in a gutter system, and ultimately drains into World Showcase lagoon at the center of Epcot.﻿﻿﻿﻿﻿﻿﻿﻿﻿

Beyond the main entrance gate and in the shadow of Spaceship Earth’s majestic structure, is a collection of granite monoliths which escalate in height as they approach the giant sphere. These monoliths were part of a Disney millennium campaign entitled “Leave a Legacy,” which enabled park guests (for a fee) to have their photo taken then digitally etched upon a metal tile which was later affixed to one of the monolithic stone slabs. ﻿

A commemorative duplication of the etching produced on a transparent plastic sheet and held in a souvenir cardboard sleeve was mailed to each guest that purchased a Legacy tile. The sleeve also provided information on how guests could locate their Legacy tile upon future visits to Epcot. The Leave a Legacy promotion was discontinued in 2007, but the half-million plus tiles created during its eight year duration remain on the monolithic slabs which stand as sentinels in the forecourt of Spaceship Earth.

Spaceship Earth: A Technical Marvel Inside and Out: Part II
Posted by darthmaz314 at 1:51 AM

Email ThisBlogThis!Share to TwitterShare to FacebookShare to Pinterest
Labels: Disney