This is 40: A Review of Judd Apatow's Latest Gem 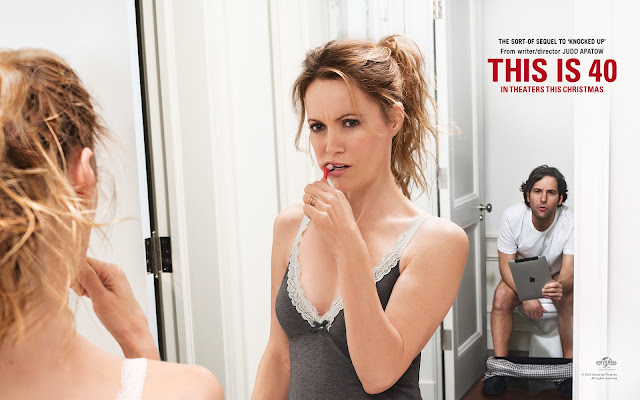 Judd Apatow's latest film, "This is 40" hit theaters on December 21st and if for no other reason, we should be thankful that the world was not obliterated, as predicted by the Mayans, so that this film can be enjoyed moviegoers across the globe. Apatow once again delivers a raunchy, yet sweet and touching tale about flawed, yet lovable characters. In what has become a common trend in movies today, the director holds a mirror up to himself and the rest of us, allowing us a glimpse of ourselves as intensely imperfect beings, yet doing our best in a mad and imperfect world. Apatow allows us to laugh at how utterly feeble and pathetic we are as we plod through life making mistakes and fools of ourselves, over and over again. 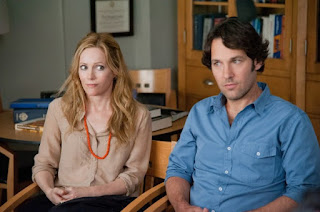 The main characters are Pete and Debbie (Paul Rudd and Apatow's wife, Leslie Mann), who reprise their supporting roles from the 2007 comedy smash, Knocked Up, also directed by Apatow. The story follows Pete and Debbie as they attempt to cope with life as they reach the big 4-0, doing their best to deal with the stresses of marriage, parenthood, career, and arriving at middle-age. The cast also includes the director's real daughter's, Maude and Iris Apatow (as Pete and Debbie's children), Albert Brooks and John Lithgow (as Pete and Debbie's respective fathers), Megan Fox (as Debbie's employee, Desi), and a host of supporting characters played by Jason Segel, Melissa McCarthy, Chris O'Dowd, Lena Dunham and others. 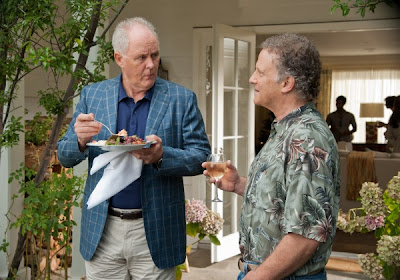 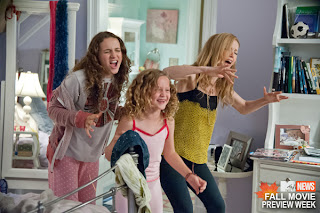 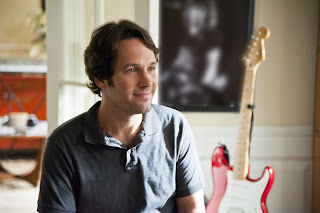 Paul Rudd delivers again as the American everyman, who you can't help love, even if he is a bit of jerk on occasion. Rudd seems so at home in front of the camera and exudes such a sincerity that it makes him seem less like an actor on the big screen and more like an old friend that you hope calls soon so that you can hang out together again. The character of Pete is wading through the muck of suburban life and drowning in a sea of estrogen, as he lives with his wife and two daughters. Pete is the man who from a distance, appears to have it all, yet does his best not to realize it and nearly throws it all away. 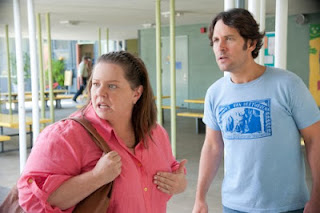 There is a minor, yet interesting subplot regarding Pete's
desperate attempts to keep his record label afloat, while
refusing to sell out by trying to sign the next sixteen-year old pop star sensation. Pete's passion and dedication to "real" music is refreshing in our culture, which seemingly only values electronic noise that the masses can dance to and are popular for six months until the next mindless mess replaces them at the top of one of the dozens of charts. The scene in which Pete realizes that he cares more about the music than the musicians themselves, who are simply following the almighty dollar like a carrot on a stick, is truly a statement maker. Rudd drives home the anguish of this realization in truly impressive fashion, particularly for a comedic actor. 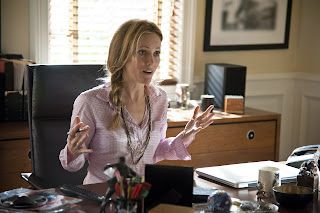 Ordinarily, one might think that it would be easy to discredit the director's wife, cast as the female lead in a big budget film. Yet, Leslie Mann prevents one from doing this by delivering a great comedic performance, with true emotionality and warmth. Mann is able to bring a complete woman to the screen in Debbie, who is vulnerable, sexy, fiesty, nasty, nurturing, and wildly protective of her family. The scene in which Debbie confronts a teenage boy who had insulted her daughter on her Facebook page is wildly hilarious. Later in the film this scene is trumped by another in which the same boy's mother (played by Melissa McCarthy) confronts Pete about his wife's behavior. That scene is then bested by another in which the three parents meet in the school principal's office and McCarthy unleashes her raw and insane comedic talents in a foaming at the mouth angry parent tirade.


Much like Leslie Mann, Iris and Maude Apatow (the real-life daughters of Judd Apatow and Mann), escape nepotistic ridicule, at least from yours truly, because they are truly talented young actresses, particularly the older Maude, who also showcased her singing talents in dad's last directorial piece, "Funny People." The Apatow girls keenly portray the love-hate relationship that is a reality for so many siblings as the grow up with one another. The girls do their best to stay out of each other's hair and out of the line of fire as their parents wage the daily war on life. Judd Apatow has inserted scenes in this film that attempt to place the audience in many different pairs of shoes, including those of the thirteen and eight year old children of Pete and Debbie. These glimpses through the eyes of a child are crucial for parents who steamroll through life, often not contemplating just how difficult it can be to be a child in today's society.

On a larger scale, that may be the best aspect of Judd Apatow's latest offering. Sure there are many uproariously funny moments and endless familiar situations that mid-lifers will recognize as their own in "This is 40." But in my opinion, it is the skill at which Apatow peels back the onion and show us what it is to be an imperfect wife, husband, mother, father, child, friend, and plain-old human being on this crazy floating ball in the galaxy, that makes this film worth seeing. This film forces us to look in the mirror, see how pathetically flawed we all are, realize that we all want the same things, have none of  the answers we are seeking, and all make the same clueless mistakes, all while making us laugh at how inept we are at being parents, wives, husbands, and children. That is more than worth the price of admission in my book.

Tip: Be sure to stay for the credits to see an alternate scene of the principal's office scene with Melissa McCarthy improving as Leslie Mann and Paul Rudd crack up in hysterics. 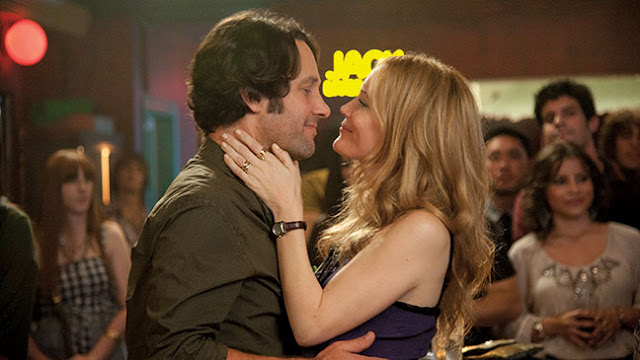