On 6/24, darthmaz314's Disney Snapshot of the Day featured the signage display for the Magic of Disney Animation attraction. Little did we know that this attraction would be announced as closing forever a few days later.


The Magic of Disney Animation was an original attraction of the then-named Disney MGM Studios and was situated at the far end of the Animation Courtyard beyond The Voyage of the Little Mermaid and Playhouse Disney. At the time of the attraction's debut, one of the most innovative and unique of its experiences allowed guests to look down on Disney animators as they worked in partially glass-walled offices, eerily bringing to mind some sort of voyeuristic human workplace safari. The attraction was the front end of the actual Walt Disney Animation Studios Orlando division, which turned out some impressive work before its closure in 2004. Some of the most notable work to emanate from the Orlando studios was ink and paint work for The Little Mermaid, the "Be Our Guest" sequence from Beauty and the Beast, the "I Just Can't Wait to be King" sequence from The Lion King, and full production work on the features Brother Bear, Mulan, and Lilo and Stitch. However, as the years passed, any semblance of actual studio production, live action or animated, was slowly extracted from the park but a few of the safari-like animator offices/studio tour elements remained.


The Magic of Disney Animation also featured a short film that examined the process of bringing a Disney animated character to life. In this experience, a cast member interacts with an on-screen incarnation of Eddie Murphy's Mushu the dragon from Mulan, as they comically describe the process of creating an animated character, from the first pencil marks on paper all the way through its explosion on screen as a vibrant and seemingly living creature. The original version of the film featured an animated Robin Williams as the comic relief alongside legendary newsman Walter Kronkite, who functioned as a guide and narrator for guests. In this iteration, Robin Williams is transformed into an animated version of himself as a Lost Boy from Disney's Peter Pan. Williams portrayed an adult Peter Pan in the 1991 Disney film Hook. The Williams/Kronkite version of the attraction film was quite entertaining and endearing and can now be looked back on with great nostalgia, since both men have passed on.

For the those who enjoy a look behind the scenes at the animation process, both films were enjoyable and worth the time, particularly since they provided a respite from the oppressive Orlando heat. For those not wishing to sit through the film, it could be bypassed by walking through the back of the theater and out into the next section of the attraction.


Another major portion of the Magic of Disney Animation attraction was the "Animation Station" area which featured interactive computer consoles that allowed guests to paint animation scenes, try their hand at adding sound effects to a scene from a Disney film, and play a game called "You're a Character" in which they answer a series of questions to determine which Disney character best represents them. This area was also home to the Animation Academy, which was a scheduled attraction during which guests are given a crash course on creating a character sketch by a Disney animator.


Also featured in the Magic of Disney Animation were several character meet and greet areas, the two most significant featuring Sorcerer Mickey and characters from the most recent Disney/Pixar film. The last area included a waiting queue that was always very cleverly and heavily themed around the featured characters' film.

Lastly, the Magic of Disney Animation pavilion also housed a museum-like section that featured concept art, storyboards, sculpted maquettes, and other story development and promotional materials from a recent Disney or Pixar release. Adjacent to this was another room with a display case that housed Academy Awards won by Walt Disney and the Walt Disney Studios.


While it is true that I am among those extremely excited to see Hollywood Studios revamped and expanded to include a Star Wars Land (and hopefully a version of California's Carsland), I am sad to say goodbye to some of the attractions (like Magic Of Disney Animation) being closed to make room for these changes. This attraction offered a variety of experiences that were uniquely Disney and fit the "behind the curtain" production experience that was once a part of Hollywood Studios concept. It was also a great spot to escape the sauna that is Orlando in summer, while still being entertained in true Disney fashion. An addition, the character meets and greets often featured some of the more rare characters, many of which you would not find anywhere else on property. Some examples I personally have witnessed included Stitch, Jafar, Mulan, Miko the Racoon, the Incredibles, Frozone, Pinocchio, Geppetto, Captain Hook, Smee, the Genie and more.


In fact, one rainy and not so crowded day at Hollywood Studios about five years ago, my family had some of the greatest character interactions ever in the meet and greet area with several of the characters mentioned above, all of 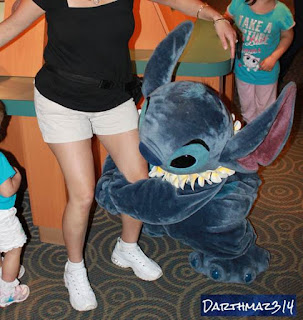 whom were at the top of their games in terms of guest interaction. Particularly memorable, was Stitch, who truly created one of those unforgettable Disney moments for my family, which included wrapping himself around my wife's leg and refusing to let her leave.

The Magic of Disney Animation officially closed on July 12th. It now exists only in our memories and the photos and videos in which we may have captured it over the years. If you have interesting photos of the attraction, feel free to e-mail them to darthmaz314@gmail.com and we may include them in follow-ups to this post.

Check back soon for a follow-up post featuring more of darthmaz314's photos from The Magic of Disney Animation.