The Internship: Should You Apply? 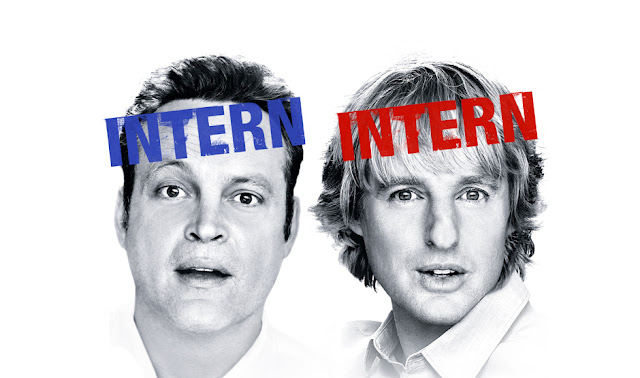 If you’re looking for some lighthearted comedy this week, type in “The Internship” and hit that “Google Search” button. Vince Vaughn and Owen Wilson reunite onscreen for the first time since Wedding Crashers in The Internship, which opened Friday night. In a summer movie season filled with a boatload of potentially big movies, which has already seen The Hangover III under-perform, it is hard to predict if this comedy will resonate with audiences and score big at the box office. But the real question is “Should you apply?” darthmaz314 will try to prep you for a possible interview with The Internship. 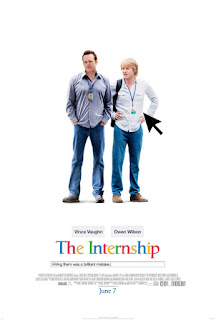 The Internship tells the story old friends Billy McMahon (Vaughn) and Nick Campbell (Wilson) who work together as watch salesmen until their employer unexpectedly closes up shop, leaving them middle-aged and unemployed in the sluggish Obama economy. The two friends embark on a journey to start fresh in life and decide to roll the dice by applying for an internship at tech giant, Google. After a bumbling and comical online interview, the boys arrive at the Google headquarters only to discover that they will be required to spend the entire summer competing against hundreds of intellectually gifted, yet underemployed young techies for a shot at full-time employment at Google. Billy and Nick, who are about as tech savvy as Tibetan Monks, are lumped together on a team of three other misfit “Noogglers” (Dylan O'Brien, Tiya Sircar, and Tobit Rapael) and assigned to a mentor (Josh Brener) that fits in even less than they do. Their team’s main rival is captained by an arrogant British elitist named Graham Hawtrey (Max Minghella), who seems to revel in their every defeat and takes personal delight in taunting Billy, calling him out as an underachiever who always manages to screw up a good thing.

All this sets the stage for a “misfits make good” movie that mixes in lessons about friendship, commitment, learning to love yourself and let go, and proving the naysayers wrong. The film’s message is a positive one as Billy, Nick, and their team never stoop to retaliation and revenge against their detractors and seem intent only on striving to meet their goal, against all odds. It’s that “Little Engine That Could” mentality that propels the group forward as they slowly let down their individual defenses and allow themselves to become not just the unlikeliest of teams, but also good friends. Throw in a sub-plot of Nick’s romantic pursuit of a tightly-wound and work obsessed thirty-something Googler named Dana (Rose Byrne), and a cameo of Will Ferrell playing Nick's sister's sleazy mattress peddling boyfriend, and you have…The Internship. 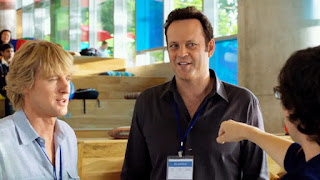 The film is not uproariously funny and won’t send you home with a six pack carved into your midsection from all the laughing during your time in the theater. Vince Vaughn and Owen Wilson basically play the characters that they have made them movie stars during their careers. Neither is breaking out with a transforming performance here. Yet their cheeky banter and quick-witted playing off of each other provides enough humor to call this a good comedy. Many of the film’s early jokes play off of Billy and Nick’s unfamiliarity with the tech world. The two struggle to keep up with their younger and more technologically inclined competition (and teammates) like Amish men with an iPad, but what they lack in knowledge they make up for in people skills and positive teambuilding know how. 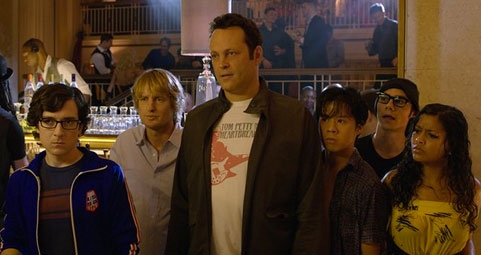 The supporting players do a great job here in rounding out the cast, particularly Aasif Mandvi, (Google’s Internship Director, Mr. Chetty) who fills the role of the tough administrator always on the back of our heroes, betting against their chances of succeeding, or at least so we are led to believe. 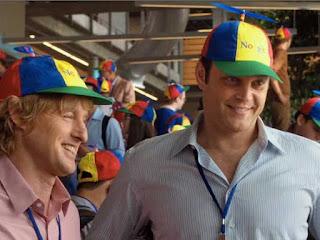 The Internship is rated "PG-13", carefully keeping its distance from an “R” in a nuanced ways such as not laying on a thick layer of F-bombs and keeping lingerie on the dancers in the strip club scene. Again, the message is positive and the theme here is lighthearted, so although not “family friendly,” is does not tread down the raunchy path of movies like the Hangover III.
Another interesting aspect of The Internship is that it gives us a peak behind the digital curtain of Google’s world of work, with most of the plot taking place at the company’s California campus. Glass walls on which the Googler’s can brainstorm ideas with dry erase markers, nap pods for the weary and overworked, and a cafeteria where everything is complimentary, are a few of the perks that may make some of the audience members languishing in more traditional employment workplaces want to polish up the old resume and prepare for an online "Google Hangout" interview of their own. With heavy consulting and on the film by Google, and the most intense product placement we have seen in a film since “The Social Network,” the film is almost seems like a two hour commercial for the internet company. 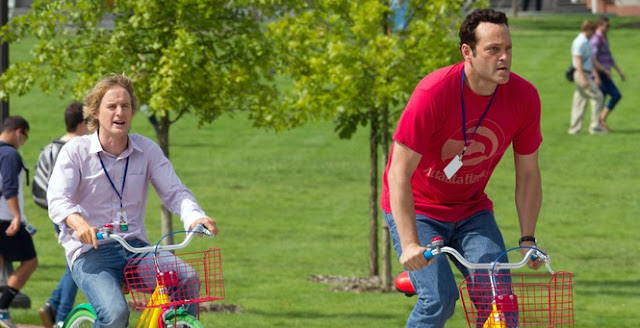 So if you are anti-Google and found this review through Bing or Yahoo, the references to “Googgliness” and the fact that everything seems to be bathed in red, blue, yellow, and green, may put you off. But if you can see past this or a fan of Google (you are reading a Google-hosted blog!) and are looking for a light-hearted, feel-good film, with a few laughs and a couple of guys you almost wish you could hang out with, then “The Internship” is worth logging on for. 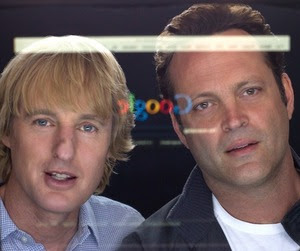 If you saw “The Internship” this weekend and would like to share a comment, please do! darthmaz314 welcomes your comments and shamelessly asks you to share this and all our posts with your friends (or enemies) if you like what you see.