Will Disney Turn the Maelstrom into a Frozen-themed Attraction? 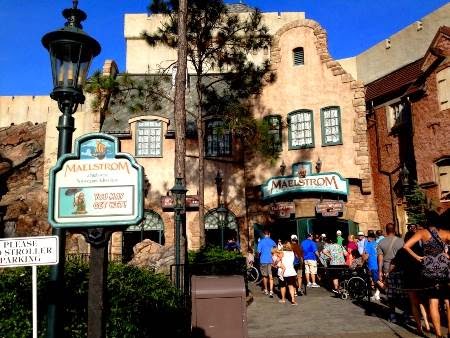 Rumors have been circulating through the internet that the Maelstrom attraction at the Epcot Norway pavilion may be closed in the near future and retooled into a Frozen-themed attraction. Disney’s latest blockbuster film has raked in over a $1 billion at the box office and surpassed Toy Story 3 as the highest grossing animated film of all time. Frozen has snagged Oscars for Best Animated Feature and Best Original Song for the immensely popular “Let It Go.” It has (with a little help from John Travolta) placed the name Idina Menzel in the lexicon of pop culture, even though she had previously starred in two of the most successful Broadway shows of all time (Rent and Wicked). It has created seemingly endless character greeting lines, some with people waiting for hours to meet its stars, Anna and Elsa, at Disney World. Considering all of this, investing in Frozen and allowing Maelstrom to fall by the wayside would appear to be a no-brainer for Disney. Yet, the purists and traditionalist are likely to cry foul as Disney pushes another corner of Disney World further from Walt’s original vision…again. Should Disney say “Let it Go” to the Maelstrom in favor of a Frozen theme? darthmaz314.com weighs in.


The Norway and Mexico pavilions in Epcot’s World Showcase are unique because they are the only ones to feature actual “rides.” Although the modern version of the Mexico boat ride features Donald Duck and friends as the Three Caballeros, most would agree that Maelstrom is the more intriguing ride experience. Your boat ride journey aboard Maelstrom comes complete with Vikings, trolls, an ocean storm, and a movie…not bad for your entertainment dollar. In fact, you could say that Maelstrom comes as close to a thrill ride as World Showcase has to offer. The attraction draws enough crowds and lines that it became a rare World Showcase FastPass attraction. So why mess with it? Disney is always tip-toeing the line between traditionalism and change in search of the best experience for their guests. It is a strategy that has served them well over the years, both as an entertainment provider and a business entity. It is safe to say that Epcot appeals to a more mature audience than the other three Disney parks. Early on, this appeal was even stronger than it is today. In the 80’s, the emphasis at Epcot was more on “edutainment” than entertainment. Educating the guests on the topics of science, technology, and world cultures while entertaining them, seemed to be the focus. There were no characters. There were no thrill rides. The overall feel of the park was more subdued and low-key. While it may not have been the Experimental Prototype Community of Tomorrow envision by Walt Disney, it was certainly a vastly different experience than that offered by Disneyland or the Magic Kingdom.


Yet in the three-plus decades since it opened, Epcot has slowly made strides away from a more mature edutainment feel and toward a more kid-friendly Disney experience. Nemo and Friends commandeered The Living Seas pavilion. Kidcot Fun Stops (now Agent P’s World Showcase Adventure) were set up in every country’s pavilion to engage the young ones. Mickey’s traveling companion, Duffy the Bear, unpacked his bags and made the park his permanent residence.  Character greetings were added throughout World Showcase. The Princess Storybook Dining buffet made landfall in Norway’s Akershus restaurant. The World of Motion became the thrill ride Test Track. Horizons became Mission Space. Figment was excommunicated from "Journey Into Imagination" and then brought back into the flock by popular demand. You get the point.

In light of all of this, converting Maelstrom into an attraction based on the current top grossing animated film of all-time seems to be a no-brainer. First, it will bring more people, particularly those with kids, to Epcot, which continues the trend toward making the park more kid-friendly. People who left Epcot off of their Disney itinerary may just be tempted to tear themselves away from the Magic Kingdom and make their way over to see the Frozen attraction at that park with the “big golf ball.” Once in Epcot, they will discover that there are characters there too, a Nemo-themed attraction, and a car ride that their young son was begging them to ride as soon as he heard the ear-shattering roar of the ride vehicle as it passes over the attraction’s entrance. The next thing you know, those same parents are buying a “Figment ears” hat and telling everyone they see how great Soarin’ was. The next time they make their way to Disney, they have a new park solidly marked on their itinerary, which happens to now be one day longer that the previous visit. Disney wins. The family wins too. See how genius it all is?


To expand that theory to another level, let’s assume that that same family wanders over to some of the other country pavilions in World Showcase. Dad discovers the beer in Germany…or England…or one of the other eleven countries. Mom discovers that there are items being sold on property that do not have characters plastered all over them or rotating lights and mouse ears. Mom and Dad discover that there is a treasure trove of restaurants tucked away in World Showcase that don’t force them to stand on a line for a burger or chicken sandwich and then move on to the condiment station to load up on the free pickles. You can almost hear them now. “There is a steakhouse here?” “Where is this Mexican restaurant?” “They have a German biergarten?” “While I was in the bathroom, I hear someone saying that there is a phenomenal Italian restaurant here!” “Oh yeah, I heard there were TWO of them!”

Let’s take it a step further. While in Epcot, the family realizes that there is a very different experience available in this park. There is quite a lot you can learn here. Whether it is communication, science, technology, or world cultures, you can truly soak in a lot at Epcot if you are open-minded and willing to expand beyond what many feel is the “typical Disney experience.” All the members of our fictional Disney vacation family may not like everything and it is possible that they may like very little of it and find that it is “just not for them.” But if they never make it into the park, they will never have a chance to decide for themselves.

So if the logic presented above (which is based solely on the opinion of your humble blog host) holds true, it seems that capitalizing on a current Disney film to expand the sheer numbers or the demographic mix of a park’s attendance is a wise business decision. So we come back to whether a change like the one being rumored is another step away from “Walt’s original vision.” Does that even matter anymore? Who even knows what Walt’s vision was at this point? Who is the custodian of this vision? I wouldn’t even begin to attempt to answer these questions.

The simple fact is that Walt Disney left us a long time ago. However, although it has been 48 years since his passing, the cornerstones of Walt’s vision continue to be many of the reasons why the Disney name reflects the gold standard of entertainment around the world. This is probably more evident in Walt Disney World than in any other facet of the Disney empire. During the planning and design phases of Disneyland, Walt believed that building a park where parents and children could enjoy time together and both be entertained was essential. Disney World is the perfect realization of this vision. Within the property boundaries of Walt’s World, from the spires of Cinderella Castle to the barstools of the House of Blues in Downtown Disney, there is quite literally something for everyone. That is one reason why it is the number one vacation destination on Earth. Adding more kid-centric entertainment to Epcot will actually play into Walt’s philosophy of an experience that the whole family can enjoy together.


Will replacing Maelstrom with Frozen remove some of the cultural flare of the Norway pavilion? Yes, but the remaining elements of the pavilion still retain the essence of the country and provide opportunities to learn about its culture and history. If they were planning on bulldozing the entire attraction for “Frozenland,” I would say that perhaps there is a better home for that idea. However, although I am a Maelstrom fan, I think it may be time to “let it go.”