Once Upon a Time - Watch It and Live Happily Ever After 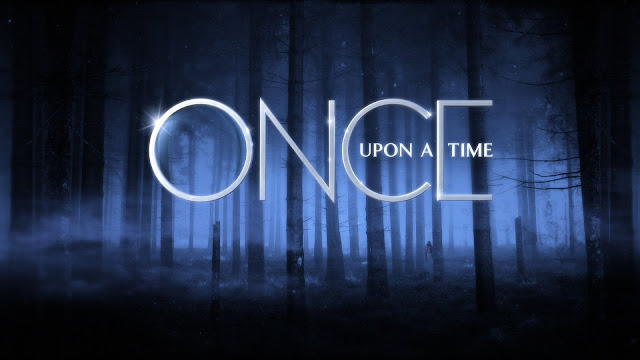 If you are have an extra hour in your week and you’re looking for a new television show to watch that doesn’t involve “real” people humiliating and embarrassing themselves by revealing to the world what a waste of molecules they really are, then you may want to give ABC’s Once Upon a Time a try. The show is the product of former Lost screenwriters/producers Edward Kitsis and Adam Horowitz and airs on Sundays at 8:00pm. The plot centers on classic storybook characters that have been transported to a modern day small town in Maine by a curse cast by the Evil Queen (played brilliantly by Lana Parilla) of Snow White fame. The Queen’s curse also stripped the storybook characters of the memories of their former selves and locked them in a perpetual freeze frame in time in which they never grow old or age. All this changes after twenty-eight years when Emma Swan (played by Jennifer Morrison) is drawn to the sleepy town of Storybrooke, Maine by her son Henry, who she gave up for adoption at birth. Henry sneaks out of Storybrooke and heads to New York at age ten in search of his real mom. Henry brings Emma to Storybrooke because he knows that she is the key to breaking the curse cast by his adopted mom, the Evil Queen herself, who happens to also be the town mayor, Regina Mills. Oh, and by the way, Emma is the daughter of storybook characters Snow White (Ginnifer Goodwin) and Prince Charming (Josh Dallas) who were the main reason for the casting of the Evil Queen’s wicked curse. Got all that? Well, that’s only part of what’s revealed in the Season One pilot! 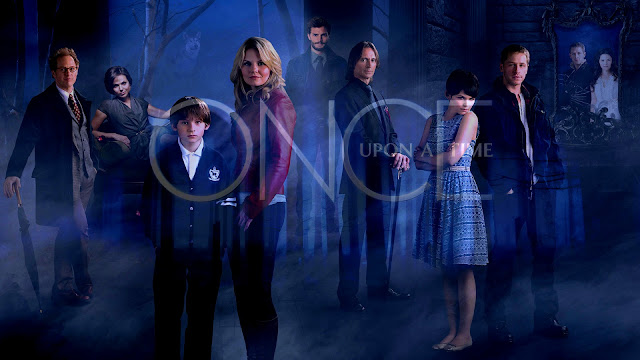 Once Upon a Time is a rich and complex series that has the potential to resonate with a broad audience. From the title, you might think that the show is sugar-coated Disneyfied prime time kiddie programming. True, most of the characters are familiar to us from the fairy-tale stories of our youth. But this show has a dark side to it and although you can gather the whole family around the TV for it, it definitely leans more to the PG than the G side of the traditional rating scale. 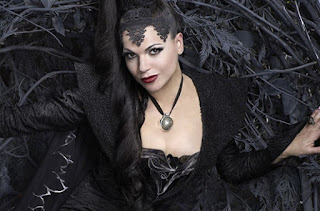 The show's characters are uniquely developed in a complex way that takes them beyond the black and white, good and evil versions that we remember from our youth. The Once Upon a Time versions of the storybook characters are a composite of elements from traditional fairy tales, the Disney versions, and some new wrinkles added by the show’s talented writing team. In fact, during the first season, all of the characters are developed along two different story lines; the storybook timeline, which takes place in the past in fantastical settings like the Enchanted Forest, and the Storybrooke cursed timeline, in which the characters do not recall their former selves and live as average citizens in the boring town of Storybrooke, Maine. 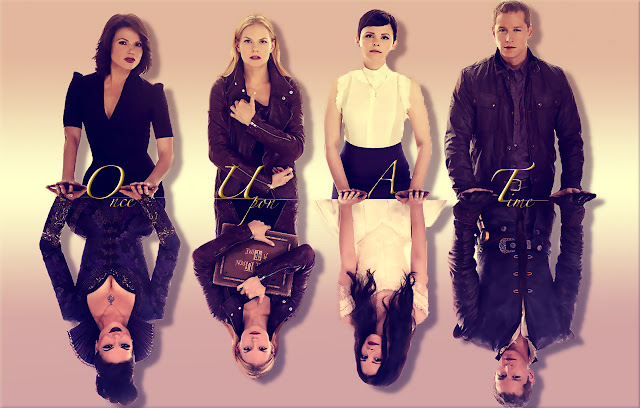 ﻿
﻿
Each episode of Once Upon a Time follows a select handful of characters in both story lines, through a series of interwoven current timeline and flashback sequences. Every episode reveals layers of the characters in both story lines, allowing the writers to develop rich and complex personas for each that reach far beyond the vanilla versions we know from the stories of our childhood. The writers masterfully link the show’s many characters together in clever back stories in both time lines so that you really never truly know what to expect from some of them.
The show's creative team has erected an enormous canvas 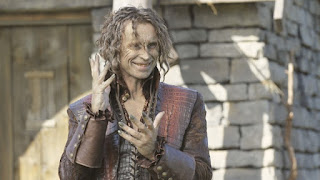 on which to paint the story of this series. They have incorporated characters from Rumpelstiltskin to Jiminy Cricket, Red Riding Hood to Pinocchio, and from Captain Hook to Dr. Victor Frankenstein. Each week characters are drawn into the plot line from one of several “worlds” such as the Enchanted Forest, Never Land, Wonderland, and of course, our own current day reality. There are endless surprises and twists and no shortage of all of the elements that anyone could desire from a series including action, adventure, comedy, deceit, deception, romance, the ever popular battle of good versus evil. Each week, the show seems to take a storybook cliché and turn it on its ear, providing a new a fresh twist on an old theme. 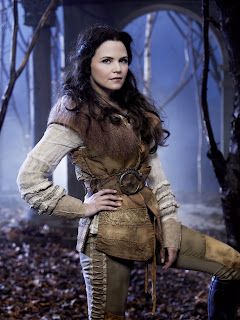 Once is chock full of great performances from cast members like Ginnifer Goodwin, whose Snow White is a kick-ass fairy tale heroine that departs drastically from any Disney Princess version you may have in mind, to present a strong female character that every little girl will want to emulate. Jennifer Morrison’s Emma Swan is another strong and confident heroine whose tough and suspicious exterior protects her vulnerability and inherent goodness. In Season One, the audience can live the adventure through Emma's perspective as she journeys from her solitary life as a bail bonds person in New York to the realization that she is the daughter of what she formerly believed to be fictional storybook characters and that the fate of a town rests on her shoulders. 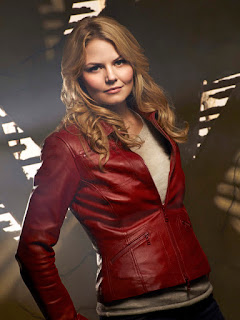 Emma could be any one of us at home who suddenly becomes swept up in this insanely unbelievable storyline in which we learn that we are much more important than we once thought, and that although we believed ourselves to be alone, are part of something much bigger than we were prepared for. On her journey of opening her mind and her heart, Emma learns, much like we all have in life, that when we love others, there are risks and dangers that test the very fabric of who we are and how much we are willing to sacrifice.

Although there is a wealth of top-notch performances, the true joys of Once Upon a Time are Robert Carlyle’s Rumpelstiltskin/Mr. Gold and Lana Parilla’s Evil 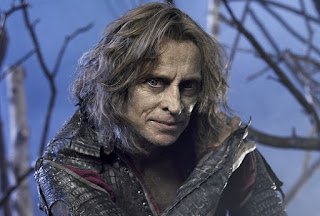 Queen/Regina Mills. Over two seasons, the audience has teetered almost weekly between despising and embracing these two characters as they are written so well and fleshed-out so brilliantly. They both flash heinous cruelty and exude pure evil in their darkest hours, yet have within them a vulnerability and desire to be loved that motivates them to perpetrate both vile deeds and virtuous acts. These characters are cleverly written and brilliantly brought to life by Carlyle and Parilla, both of whom are reason enough to watch the show. 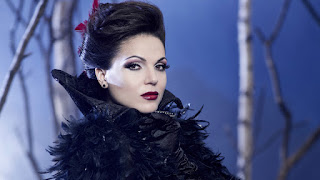 Be warned...Once Upon a Time is what I call "intelligent television." You truly need to invest in this show to get the most out of it. To keep up with the endless tidal wave of plot twists and details that wash over you as a viewer, you need to pay attention in order to appreciate the journey that the creative team is attempting to take you on. There are real life themes of regret and loss, family dynamics, true love, the duality and inner conflict of people, and the dangers of the consequences that inherent in the choices we make. All that is there for you if you look for it. Or you can just mentally flat line it and enjoy it on a simpler level. 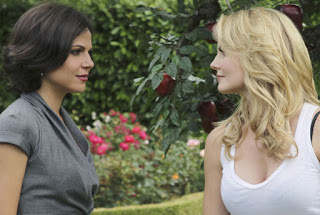 Once Upon a Time is definitely not a show that you want to start watching from its current point without backtracking to watch the series from its inception. Season Two is drawing to a close, but Season One is available on Netflix and Hulu Plus offers both Season One and the Season Two episodes aired to this point. To truly appreciate Once, you need to start from the beginning. Chances are, you will be hooked from Episode One and will devour the forty-plus already aired episodes and still be hungry for more. So check it out now and stop missing out on one of the best shows on television. 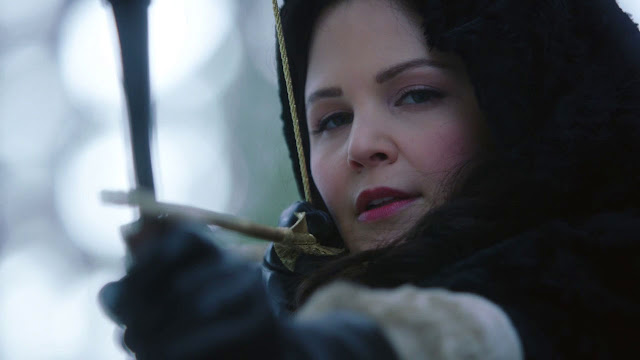 .........and if you get hooked, you may have more to enjoy soon. ABC has approved a Once spin off entitled, Once Upon a Time in Wonderland, which will focus on Alice, who oddly has never made an appearance on the original "Once."
Posted by darthmaz314 at 4:29 AM

Email ThisBlogThis!Share to TwitterShare to FacebookShare to Pinterest
Labels: Once Upon a Time, Television